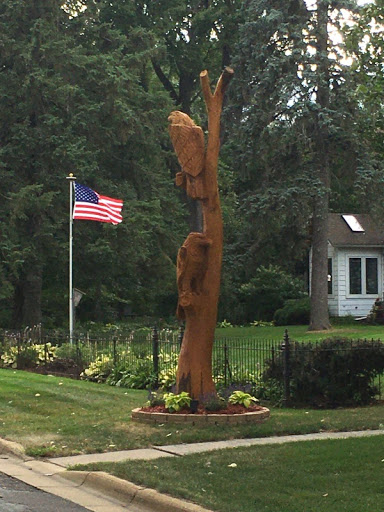 Posted by David Kubiatowicz at 3:39 PM


Spring in White Bear Lake Minnesota, along White Bear Lake, during the Pandemic of Covid-19 2020.  Gradually people are getting out of their homes again.  Fortunately, Nature's Spring is oblivious to the concerns of the world! 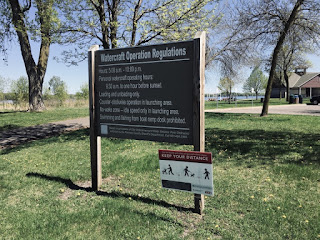 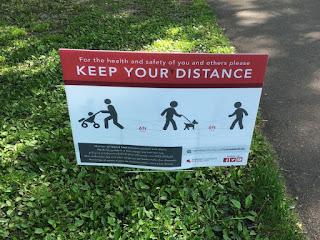 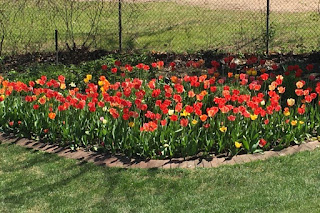 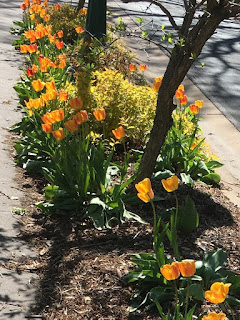 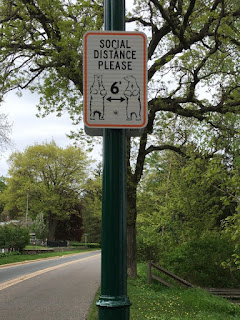 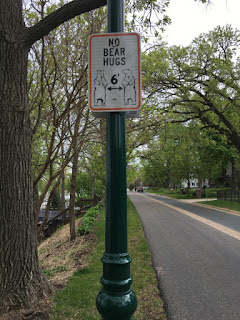 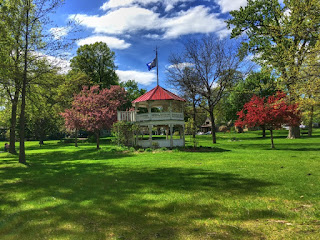 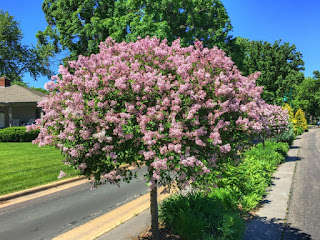 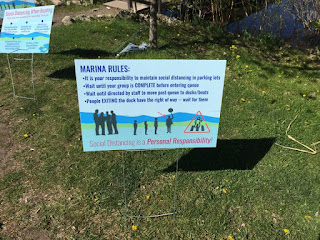 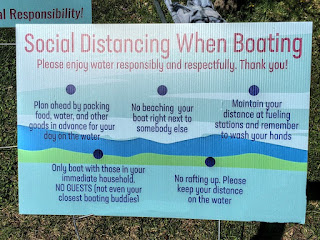 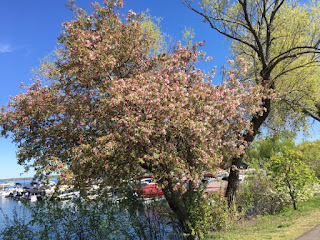 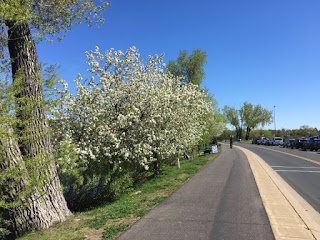 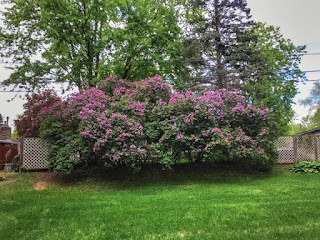 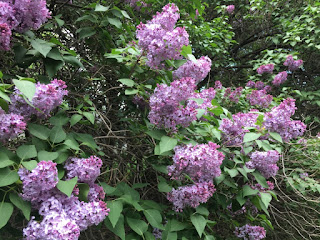 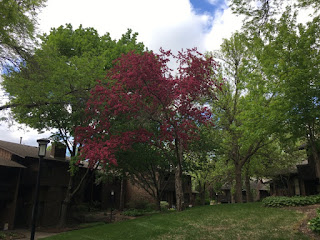 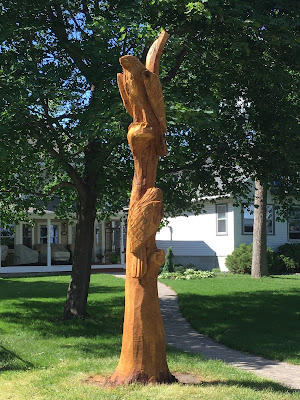 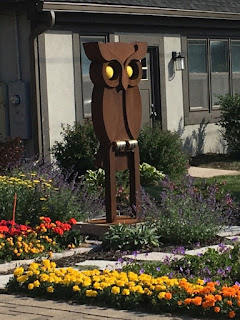 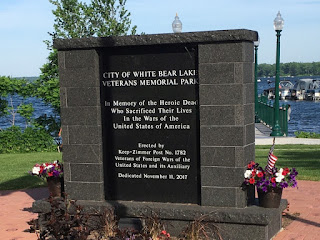 Posted by David Kubiatowicz at 10:03 PM


"When they [Jesus and two disciples who did not recognize him] drew near to the village to which they were going [Emmaus], he made as if to go on; but they pressed him to stay with them. 'It is nearly evening' they said 'and the day is almost over.' So he went in to stay with them.  Now while he was with they at table, he took the bread and said the blessing; then he broke it and handed it to them. And their eyes were opened and they recognized him; but he had vanished from their sight. They they said to each other, 'Did not our hearts burn within us as he talked to us on the road and explained the scriptures to us?'  They set out that instant and returned to Jerusalem.  There they found the Eleven assembled together with their companions who said to them, 'Yes, it is true.  The Lord has risen and has appeared to Simon.' Then they told their story of what had happened on the road and how they had recognized him at the breaking of the bread." (Luke 24:28-35)

"After the sabbath and towards dawn on the first day of the week, Mary of Magdala and the other Mary went to visit the sepulcher.  And all at once there was a violent earthquake, for the angel of the Lord, descending from heaven, came and rolled away the stone and sat on it.  His face was like lightning, his rob white as snow.  The guards were so shaken, so frightened of him, that they were like dead men.  But the angel spoke; and he said to the women, 'There is no need for you to be afraid.  I know you are looking for Jesus, who was crucified.  He is not here, for he has risen, as he said he would.  Come and see the place where he lay, then go quickly and tell his disciples, "He has risen from the dead and now he is going before you to Galilee; it is there you will see him".  Now I have  told you.' Filled with awe and great joy the women came quickly away from the tomb and ran to tell the disciples" (Matthew 28:1-8)


Posted by David Kubiatowicz at 1:00 AM


"Now on the first day of Unleavened Bread, the disciples came to Jesus to say, 'Where do you want us to make the preparations for you to eat the Passover?' 'Go to so-and-so in the city' he replied 'and say to him, "The Master says: My time is near.  It is at your house that I am keeping Passover with my disciples" '  The disciples did what Jesus told them and prepared the Passover." (Matthew 26:17-19)


"They were at supper, and the devil had already put it into the mind of Judas Iscariot son of Simon, to betray him. Jesus knew that the Father had put everything into his hands, and that he had come from God and was returning to God, and he got up from table, removed his outer garment and, taking a towel wrapped it round his waist; he then poured water into a basis and began to wash the disciples' feet and to wipe them with the towel he was wearing." (John 13:2-5)

"(After supper) He left to make his way as usual to the Mount of Olives, with the disciples following.  When they reached the place he said to them, 'Pray not to be put to the test'. Then he withdrew from them about a stone's throw away, and knelt down and prayed 'Father' he said 'if you are willing, take this cup- away from me. Nevertheless, let your will be done, not mine.'  Then an angel appeared to him, coming from heaven to give him strength.  In his anguish he prayed even more earnestly, and his sweat fell to the ground like great drops of blood. When he rose from prayer he went to the disciples and found them sleeping for sheer grief. 'Why are you asleep?' he said to them.  'Get up and pray not to be put to the test.' " (Luke 22:39-46)

"He was still speaking when a number of men appeared, and at the head of them the man call Judas, one of the Twelve, who went up Jesus to kiss him.  Jesus said, 'Judas, are you betraying the Son of Man with a kiss?'  His followers seeing what was happening, said, 'Lord shall we use our swords?' And one of them struck out at the high priest's servant, and cut off his right ear.  But at this Jesus spoke. 'Leave off!' he said 'That will do!'  And touching the man's ear he healed him" (Luke 22:47-53)


Note 1: Scripture passages are from the Jerusalem Bible copyright 1966 by Darton, Longman & Todd Ltd and Doubleday & Company, Inc. Garden City, New York,
Note 2: I purchased the photos used in this Holy Thursday post from dreamstime.com as black and white images credited to the copyright listed.  I added color to the images using free software on lunapic.com.  These changes are permissible under dreamtime's image usage policy.


" So the disciples went out and did as Jesus had told them.  They brought the donkey and the colt, then they they laid their cloaks on their backs and he sat on them.  Great crowds of people spread their cloaks on the road, while others were cutting branches from the trees and spreading them in his path.  The crowds who went in front of him and those who followed were all shouting:

'Hosanna to the son of David!
Blessings on him who comes in the name of the Lord!
Hosanna in the highest heavens!'

And when he entered Jerusalem, the whole city was in turmoil. 'Who is this?' people asked and the crowds answered, 'This is the prophet Jesus from Nazareth in Galilee' " (Matthew 21:6-11)